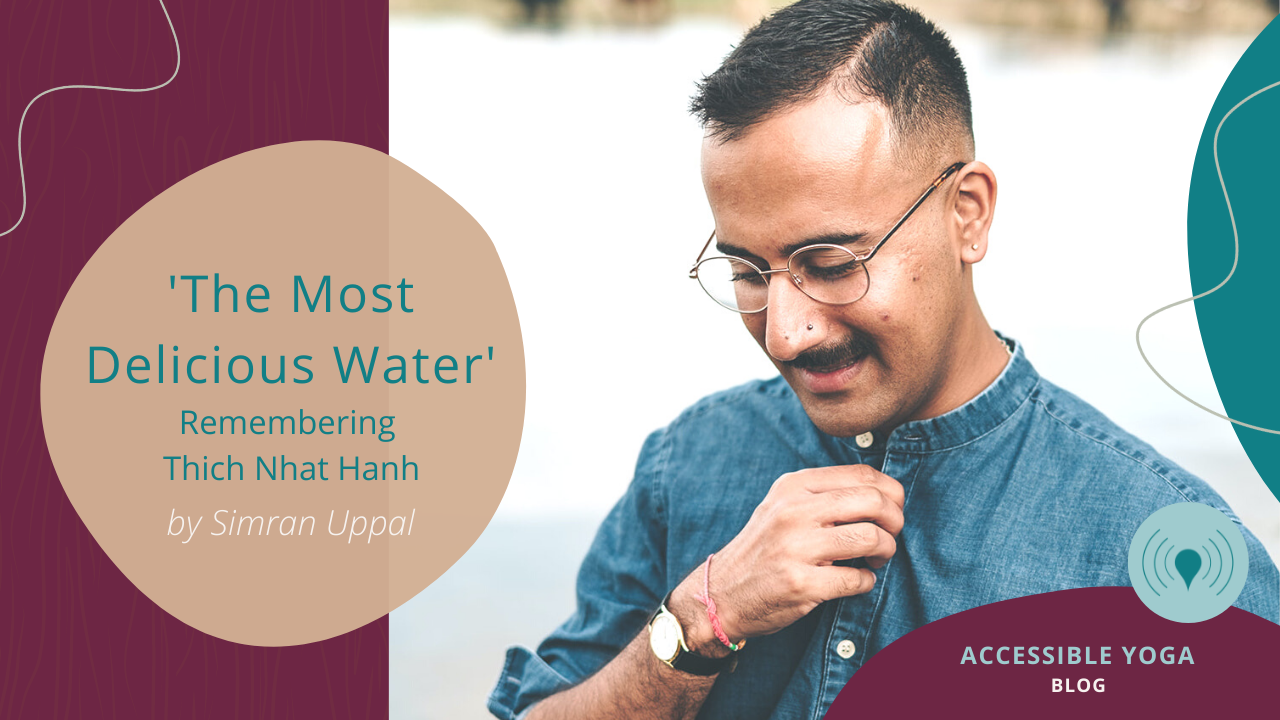 The Thien Buddhist teacher, writer, and peace activist Thich Nhat Hanh passed away on January 22nd this year. He was 95 and had chosen to continue from this form of living to the next one at the temple in Vietnam where, aged 16, he first became a monk. Last weekend, his 49th day ceremony took place, marking the end of the most important period of formal mourning and remembrance.

In Cultivating the Mind of Love (1996), and in one of his beautiful books for children, The Hermit and the Well (2001), Thay tells the story of one of his first spiritual experiences. On a school trip to a sacred mountain near his home in northern Vietnam, he sneaked away from the group. It was a hot day, but he wanted to find a famous old holy beggar who, for hundreds of years, had been said to be living in a little hermitage on the mountain. He didn’t find the wise man, but he did find a natural spring, a pool of cool, clear water. He drank this water, and found a sentence coming to his mind: ‘J’ai gouté l’eau la plus délicieuse du monde,'--'I have tasted the most delicious water in the world.'

Reading Thich Nhat Hanh for the first time, nearly 10 years ago, felt like dipping my hands into the clearest, coolest, sweetest water, and even being allowed – being celebrated, being helped – to take a sip, to drink until I'd had all I wanted. Aged 17, I had more anger than I could hold, and so much shame that I had all but deleted myself from myself, and the startings of a grief I have only lately come to meet and hold in its fullness. I can’t remember the first book of Thay’s I read – I have a memory of carrying How to Walk around with me nearly everywhere for some years, during a difficult period, but that beautiful tiny little book, a little amulet with the internal movement of a sigh held on every page, was only published in 2014. I think it was Peace Is Every Step (1990), still the book I recommend most often as a way into the huge body of work Thay and his community have made, that was my first encounter with him.

Thay’s was the first voice to tell me that it was okay to feel what I was feeling, and it was okay to be the kind of person who was hurt by what was happening to me. Thay helped me see that my anger, my shame, and even the grief I wasn’t yet ready to meet – none of these things were the problem. I could resource myself, and find community to help resource me, in meeting them and holding them with the care that I myself deserved to be held with. I could find ways to go into the world and build what I wanted to build, build what needed to be built, to find and make and become part of whatever is collective, radically oriented, and rooted in care.

Some years later, my friend Rishi sent me a series of high-energy, thrilled, ‘let’s do it’ type Facebook messages. Rishi is my brother, really: we first met at Hindi Tots in West London (despite me being Punjabi, and him being Gujurati); we went to nearly the same schools until we left to university, and grew alongside each other as young queer people, young socialists, and young Buddhists/meditators. Rishi is a kalyana mitta, teacher-friend, a friend who holds a whole sangha inside themself for me, and I for them. Rishi had managed to charm one of the Plum Village monastics into opening up two extra spaces for the yearly young people’s Wake Up Retreat that summer, so long as we had a tent for pitching in the beautiful gardens of the monastery.

We went to Plum Village for the first time for that retreat, four years ago, nestled away between the vineyards and sunflower fields, deep in the countryside of the south of France, a series of great old stone buildings scattered along the sides of a gentle hill. When we went to sign in, we saw a couple of foldaway tables, clearly added at the last minute to the side of the room, with a huge rainbow flag above them. Hanging above was a great big banner saying ‘Rainbow Family’, and then the same in French, I think. We spent a week doing all our retreat activities, group sharing, gentle breaking of the rules, in a group of other queer retreat goers, all facilitated by queer monastics. Many of them were queer monastics of colour.

Queerness was something I had always had to keep far from organised religious spaces. Institutional Sikhism – for all its radical, communitarian, and anti-imperialist energy – can be homophobic, Islamophobic, casteist, and entrenched in the social politics and theology of colonialism. Spending a week meditating, singing, being led off to secretly swim in the lake together by a young queer monastic (whose name I will shield), and most of all, sharing facilitated, sacred spaces to speak about whatever we were feeling in that moment and in that stage of our lives, and to do all of it in community, supported by Buddhist monastics who were themselves queer--this is just one of the uncountable things that could not have happened without Thich Nhat Hanh. It could not have happened without him, and not without many young lay practitioners, practicing and advocating fiercely within the global organisation.

This is not to say that Plum Village is a perfect oasis. Among the many other challenges that face it, as a global religious and secular movement, the order is struggling, and, by some counts, failing to remove the transphobia rooted deep in Buddhist scripture around monastic initiation. But the community is alive, and is made up as much of the people working for change within it, as it is made up by the older, more powerful, more conservative voices. It would be impossible to list all of the extraordinary people doing extraordinary work, inside and outside of Plum Village, who are inspired, resourced, and supported by Thay’s teachings. Suffice to say, they are many, and in every field you could imagine – not least the liberation-, justice-, and accessibility-oriented corners of the yoga world. I wonder what proportion of the world is, say, 3 degrees or fewer removed from Thay’s teachings.

In Vietnamese Buddhist contexts, you can call any monastic by the term ‘Thay’, ‘teacher.’ ‘Thay’ is what Thich Nhat Hanh’s followers call him, but it’s also a word some Plum Village practitioners use to refer to any other person. You can turn to a friend, a stranger, the person sitting in front of you in the meditation hall whose happy smile in the middle of practice gave you a tiny smile too, and call them ‘Thay’, ‘teacher’. Thay once said that the next Buddha, the next great location of awakening and care, the next great teacher, the next great world-changer, might not be an individual, but a whole sangha--a whole community, a community Buddha, a community body as a teacher and agent for change, holding every person within itself in agency, and in grief, and in joy.

This is the way that our grief for Thich Nhat Hanh’s passing is real, as real as the fact that Thay has not passed. He continues in the community body, in the clouds above his root temple in Vietnam that hold the water vapour from his last breath, in the rivers and oceans all around us that have even one molecule of that water, in the thinking and feeling and talking of the uncountable people who met his teachings while he was alive, and who continue to meet them today, as they shift, and grow, and put out new shoots and roots in rich, well-watered soil all over the world.

Thay, as a child, never met the ancient wise man who was said to live on the mountain, but he met a pool of water that held all the wisdom and nourishment he needed, then and there. Nanak says, ‘pawan guru, pani pita, mata dharat mahat’--'the winds are my teacher, the waters are my father, and my mother is the great earth.’ We will never meet Thay in person now, but we will meet the rivers and oceans and lakes, the little pools in the mountains. We will meet him in books and sunflower fields, in tangerines and our lovers, in the dear friends we met as children, and in the strangers we bump into every day. And, most intimately, we will meet him in ourselves. Thay invited us to say a line of poetry when we see a stranger in the street, with a smile: ‘A lotus for you, Buddha-to-be.’ Maybe we can simply remember him, in the body that is returning to its parts, and in the beautiful world around us--in clouds and rivers and mountain springs and our chosen families--and say with him: ‘J’ai gouté l’eau la plus délicieuse du monde,’--'I have tasted the most delicious water in the world.' 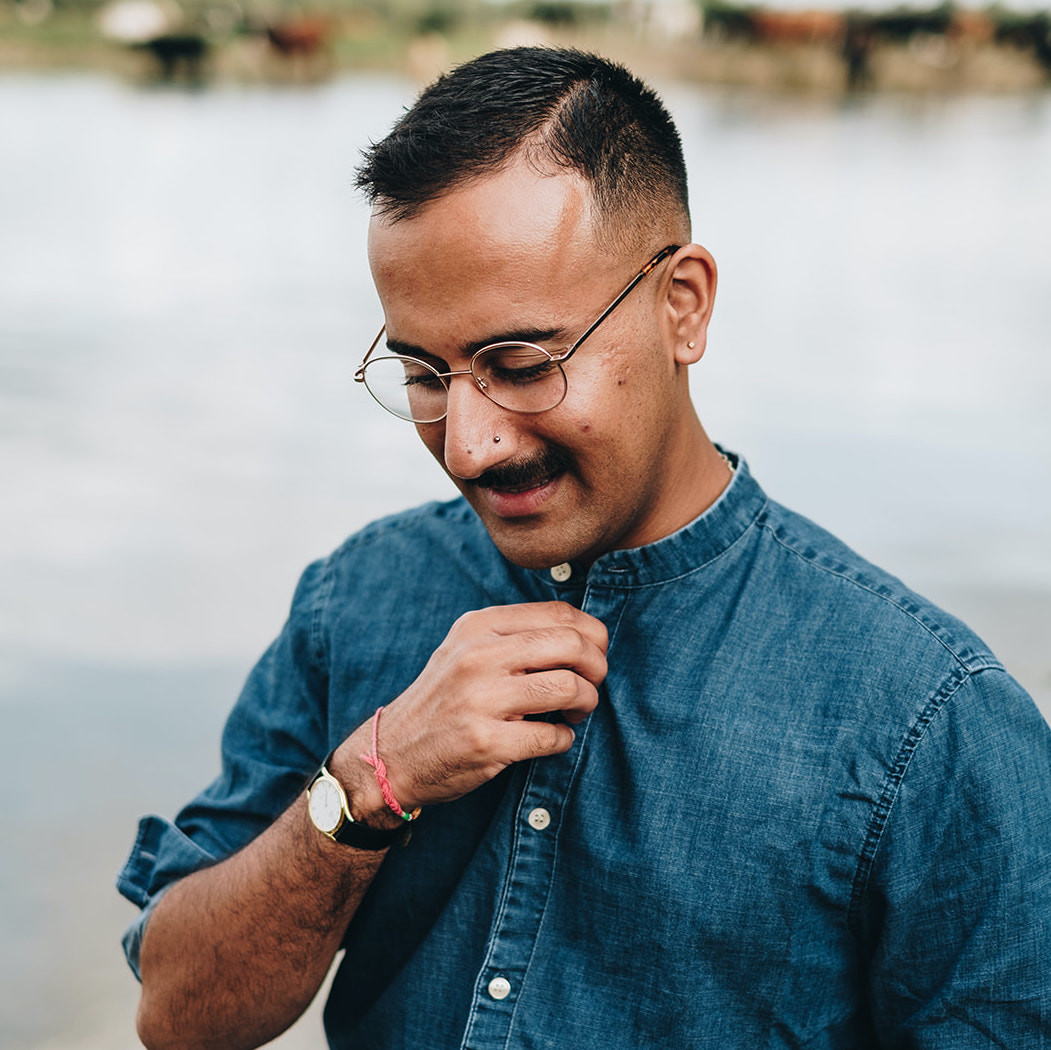 Simran Uppal (they/them), is a yoga teacher, writer, and community organiser based in East London. You can find more about their poetry, essays, yoga teaching and training, and workers rights organising, on their socials, @simransuppal, or on their website, simranuppal.co.uk.

Check out this conversation between Simran and Accessible Yoga Founder Jivana Heyman, titled "Ease within trauma: Practices from and for radical communities," recorded in May 2020.