Reflecting On the Trauma of Caste 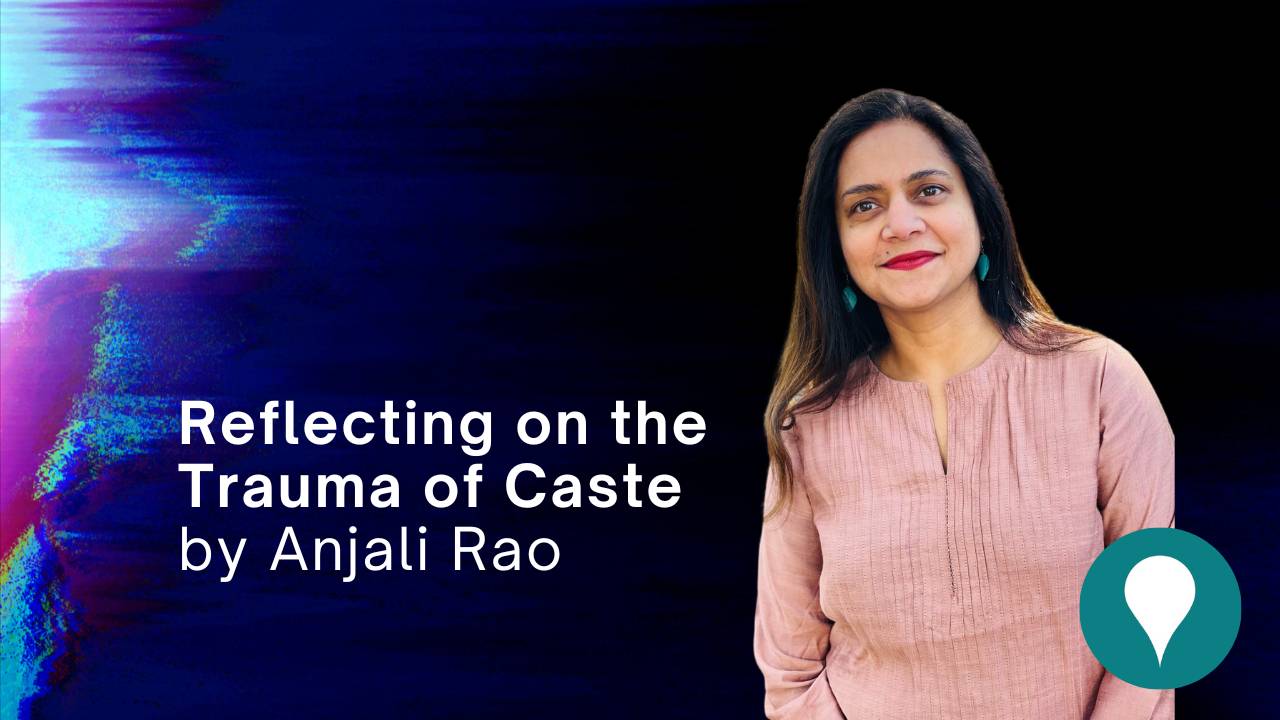 I grew up with caste privilege, as a subclass of the Brahmin caste called the Gowda Saraswat Brahmin. We are fish-eating Brahmins, and thus not at the top of the hierarchy. Historically, we are nomads who came in from the North and settled along the coastlines of India: in Bengal, in Maharashtra, in Kerala and in Karnataka.

My parents were distinctly different from each other, with different belief systems. One was an atheist, and the other someone who deeply and simply practiced Bhakti. Dinner table discussions and differences of opinion around any topic were intentionally fostered. I was a question-er of all the things around me.

Why did we have to bow down to elders who were obviously bigoted or patriarchal or arrogant? Why did some have a lot of resources while others struggled to make ends meet? Why did boys get initiated into the Brahmin caste (a ceremony called the Upanayanam where a pre-teen boy starts learning the texts from a Guru) and girls couldn't?

If these concepts and practices are not available to all, are they even valid liberatory spiritual traditions? Why did some have access to get inside the temple and some didn't? And so on and on. I resolved then that as an adult, I would in some way challenge these systems that overtly and covertly uphold Brahmanical patriarchy.

Then, as a parent, much to the consternation of the grandparents and other elders, we chose to not have the symbolic thread ceremony for my son. As a Yoga practitioner and a teacher, I became growingly aware that the Yoga lineages and traditions were formed, taught, and practiced by those of us with caste privilege. I share all this to be transparent and to locate myself as an ally, with solidarity for the movement for caste abolition.

The corpus of Yoga is embedded within the caste system.

The Brahmins (scholars and priests) composed, commented, and taught the Vedas, the Upanishads, the Gita, the Yoga Sutras and so on. These teachings have influenced and transformed lives and these teachings have not been and are not accessible to all. Both of these statements are true.

There have been uprisings through Yoga history from folks who have questioned and rebelled against caste hierarchy and Brahminical patriarchy. The Bhakti movement was birthed because of the caste system. My personal journey of dismantling caste privilege is a work in progress, and as Thenmhozi Soundararajan, writes in her book, The Trauma of Caste: A Dalit Feminist Meditation on Survivorship, Healing, and Abolition, “Unraveling caste is an iterative process that leads to shared healing. Caste operates like ghosts and because we are unconscious of it, we inflict our wounds everywhere.”

We need to visibilize the invisible. I name the ghosts of caste when I share the teachings of Yoga. Naming one’s privileges is a key practice of intentional social change. It is a practice of ahimsa and satya, of calling out harm and being truthful in every way possible. Caste and Yoga was the topic I chose to present at the Accessible Yoga conference, and I continue to learn and unlearn all the ways in which I have internalized caste. It is the work of a lifetime. I invite you to do the same. Consider these questions:

Yoga invites us into expansiveness, where we can glean into the complexities of the past, and often hold paradoxical and conflicting truths.

The teachings of Yoga support cultivation of viveka, discriminative discernment. Through practices of embodiment we nurture our collective and individual nervous systems. We don't turn away or freeze from a crevasse of shame and guilt, but face head on with courage and compassion for ourselves and the collective. We reflect and act on our roles in co-creating a world where liberation from suffering is possible for all beings.

Caste: the word is shrouded in harmful silence, willful ignorance, and outright denial of its very existence. Caste: the oldest and most pervasive social stratification system that establishes a false hierarchy of peoples and that continues to harm, kill, and oppress millions of people all over the world.

Caste manifests in all spheres, from the environment to education, from healthcare to employment, from spirituality to government, causing discrimination and marginalization of Dalits and other caste-oppressed people.

The origins of caste can be traced back millennia, in the Indus Valley Civilization (7000- 2000 CE), and depending on the scholarship, the historical source of caste is debated and controversial. While some believe that Aryan migrants established the caste system, other scholars decry this theory and offer that the system evolved from integration of prevailing indigenous populations. This question on the sources of caste requires further study and analysis and we need to learn about the histories from the people most impacted by the caste system rather than center European and caste-privileged scholars.

The earliest mention of Caste or Varna (meaning color in Sanskrit) is mentioned in the Purusa Suktam of the Rig Veda (2000 BCE) and is a system of categorization of people into varnas:

Communities which belong to one of the four varnas are called savarnas. The Dalits and other groups who do not belong to any varna were called avarna. Jatis are subcategories of this system. In South Asian communities, one uses jatis rather than the broader varnas as a means of locating oneself in the system. The categorization of people based on occupation and/or inclination toward a particular kind of work or role in society solidified over centuries and was institutionalized via texts like Manu Smriti (Code of Manu, composed in the second century CE).

Brahminical patriarchy was firmly established during the Vedic Period with Brahmins and Ksatriyas, specifically cisgender men as the ones with access to spiritual and material resources. Brahmins at the top of the hierarchy dictated and formed societal norms and held the reigns of material wealth and spiritual liberation.

Shudras, Dalits, and other caste oppressed were in bonded labor, could not own property, and did not have access to religious texts which were composed in Sanskrit, a language that was exclusive to those with caste privilege. These texts that ironically promised liberation to those who studied and practiced the tenets—composed mostly by Brahmins—were further weaponized.

Inter-caste marriage was prohibited; inter-caste mobility was impossible. In other words, one was born into a certain caste with no chance of moving towards spiritual liberation and material resources. The Dalits and the Shudras were the unpaid labor of those with caste privilege. The caste system born thus thrived even before the European colonizers set foot on the land. The British, however, further solidified the caste system, including the category of caste in the 1872 census, giving it a formalized legal status.

Dr. Bhimrao Ambedkar, (1891-1956), a Dalit icon, caste abolitionist, pioneer thinker, and leader, influenced millions into decrying caste discrimination at every level. He was also a jurist and economist who drafted the Indian constitution and toward the end of his life converted to Buddhism.

The Trauma of Caste Remains

Even though discrimination based on caste in India is considered a legal offense, caste is omnipresent, infusing every realm of life, and is carried through the diaspora.

As Thenmhozi states, “De-brahminization of Yoga spaces is an imperative.” She defines and details what this process entails and articulates with clarity, how we can collectively and individually unite to abolish caste in every level in her book, The Trauma of Caste,  A Dalit Feminist Meditation on Survivorship, Healing and Abolition.

The Trauma of Caste is a must-read for anyone who is interested in learning about and dismantling caste. Thenmhozi compels us to delve into unraveling how caste continues to harm millions of people all over the world in devastatingly violent, and also less obvious but nevertheless dangerous, ways. She prevails upon all of us to explore our own positionality within the various systems, connecting other liberatory movements of race, gender and indigeneity with a clarion call for caste abolition.

Weaving together personal and historical narratives, factual information gleaned over decades as an activist, organizer and co-founder of Equality Labs, Thenmhozi offers a framework for healing from the wounds of caste oppression around the Four Noble Truths. Along with this, she offers embodiment practices and Buddhist teachings to anchor and propel this radical work of disruption of caste oppression toward collective liberation and healing. It is a groundbreaking book, coalescing truth-telling with a commitment to sharing strategies for building solidarities across differences.

It is not a coincidence that Thenmozhi is the first guest on my new podcast, The Love of Yoga. As someone with caste privilege, having this conversation with one of the leaders of caste abolition is an intentional move in practicing solidarity. In our conversation, we dive into her work and talk about how we can be allies in the resistance as Yoga practitioners.

It is a radical conversation, and a courageously vulnerable one. She is generous in sharing her thoughts with an incisiveness and humility that in itself is inspiring. I am grateful. Please listen to this podcast, buy her book, share her words, uplift the work, learn from her and other Dalit movement ancestors detailed in the book, and reflect on how we can truly center Dalit feminist leadership in this movement.

It is more than time. Let us begin and keep going.

Go deeper into the conversation

The first episode of Anjali's new podcast, For the Love of Yoga, features special guest Thenmozhi Soundararajan, author of The Trauma of Caste. 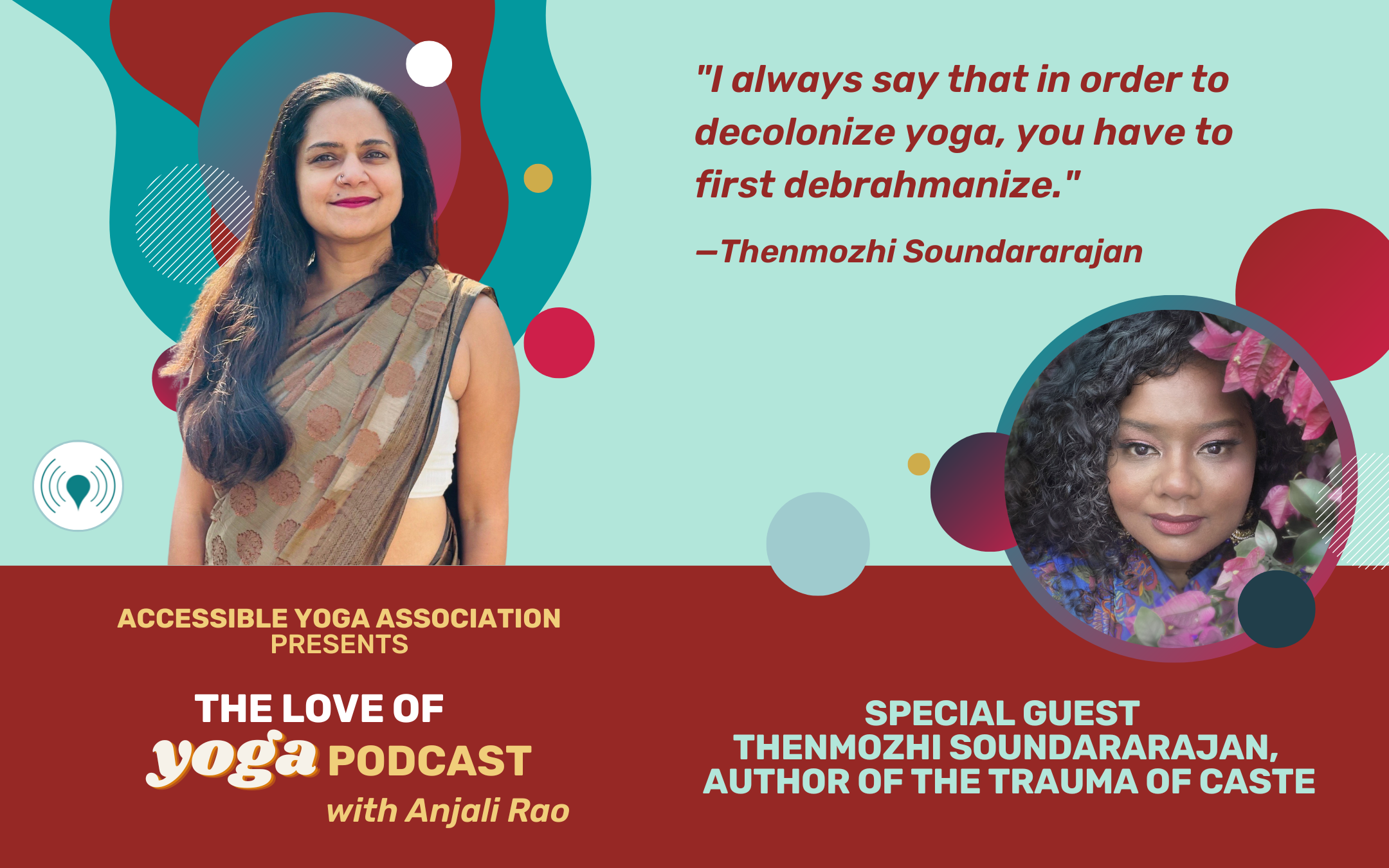